There are two filters in Movebank designed for Argos Doppler data that Data Managers can use to identify and flag location records as outliers:

These filters can be run in the Event Editor or from the Studies page. See instructions. If Argos data are being imported to Movebank through a live feed, these filters can also be automatically applied to incoming data. Argos filters work with Argos Doppler locations calculated using both the least squares analysis and Kalman filter methods (read more).

Data requirements: Argos filters require both location estimates provided by Argos as well as the LC (Argos location class) attribute. In addition, the Best of Day filter in the Douglas Argos Filter uses the Argos IQ and Nb mes attributes, and you will need these attributes in your data for the filter to run. Argos IQ values without leading 0s, such as provided by Argos WebService, will give the same results as 2-digit values (for example, a value of "06" will be processed the same way as a value of "6"). If your data are missing some of this diagnostic information, see the FAQ for advice.

Preprossessing: In addition to applying the filters as described below, as a first step of filtering, Movebank runs an algorithm to identify Argos "mirror" (Solution 2) locations that are likely to be the better of the two Argos location estimates, and in these cases will store the Solution 2 coordinates as the Movebank latitude and longitude attributes—this happens in about 3% of cases (Douglas et al. 2012). The algorithm chooses between the Solution 1 and Solution 2 locations along an animal’s track by determining the set of points that results in the shortest path through all combinations of both sets of locations, ignoring class Z locations. The algorithm then makes a second pass to fill in either the primary or alternate class Z locations. Distances are calculated as great circle routes (orthodromes) using the World Geodetic System 1984 reference ellipsoid.

The chosen Argos filter settings are then applied to this improved set of locations. Both sets of coordinates remain stored in your dataset. These changes will not be reverted if you later clear your Argos filter settings. You can also manually select which solution to use as the "correct" location in Movebank using "Argos valid location manual".

The Simple Argos Filter is based on location classes provided by Argos for Argos Doppler-based locations and stored in the Argos LC attribute. The filter options look like this:

The Douglas Argos Filter allows you to filter Argos data by flagging locations that exceed thresholds for distance between consecutive locations, and velocity and bearing between consecutive movement vectors. It was originally developed by David Douglas from the U.S. Geological Survey Alaska Science Center and has been re-implemented for Movebank (thank you David!). For more information, see the following resources: 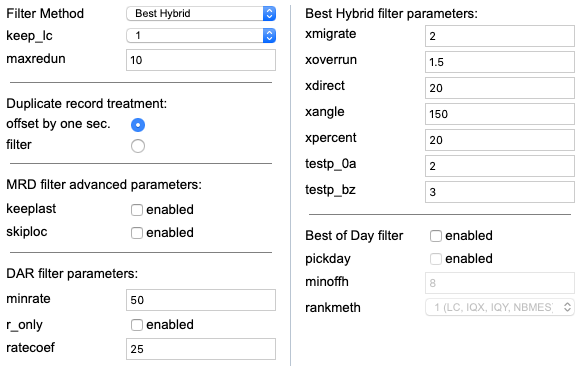 The parameters you need to provide depend on the chosen filter method, as described below.

Parameters required by all filters

The parameters xmigrate and xoverrun determine if a sequence of points is considered a migration event.

The Best of Day filter selects one position ("Best of Day") per day or duty cycle. It is applied after the regular filtering procedure.